From the time I was 5 years old, music has played an important role in my life.
Someday I will tell the whole story. But here you will find my humble homage to Bruce Cockburn.

The first time I ever heard his voice…I was taken.
It was a warm sunny day in Boulder, Colorado. I was out cruising in my ’73 VW bug, wishing for something ‘good’ to listen to. Music wasn’t inspiring me much at this point in time (’81). Then a song came on the radio I had never heard before…there was something about it that sent chills down my spine and tingles up my arms. It wasn’t that the song lyrics were really profound (but there were lyrics worth listening to!), but the intensity in which it was being sung. It moved me. And the dj didn’t say who it was! Couldn’t have that… I had to know. As I just happened to be near the college radio station – KBLX (?) I drove to the entrance on a side street..double parked ran upstairs and shouted to the startled radio-people,
“Who was that you just played?!” You must know the rest, they said it was Bruce Cockburn and they play a lot of his music.

I went in search of something I could listen to…his latest album at that time was, "Inner City Front". Of course, I had to back track into his earlier stuff, some 10 + albums! And I have been collecting everything he does since then.

Come to find out, his songwriting is powerful and beautiful and polititcal at times. He says so often what I can barely articulate…and he says it OUTLOUD! An amazing guitarist as well. If you have never listen to the man, may I suggest you take the time to hear him. After 30+ albums, I am sure you will be able to find something you can relate to.

Looking for a complete archive of the man, his songs, albums, comments and tourdates? … please go to www.cockburnproject.net. 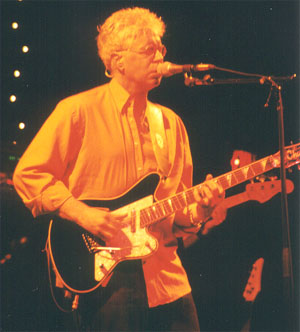 I have been listening to Bruce’s music regularly since 1981, for over 30 years…. yes that means there’s always a cd of something Bruce at hand! I have bought albums, cassettes, and now cds of all his material released through his recording companies. I also know each and every nuance and note of the material. It can tend to get stale, even for someone who loves his work completely. Then a very special person sent me 4 double cds of live show recordings! Wow. To be able to hear the music in this format makes it all new again.

So I became involved with an online group trading LIVE Bruce material, BC-LIVE. A friendly bunch of folks, who are very serious about Bruce’s music. If you are interested in acquiring and trading live shows, this is where to go.

I have seen Bruce perform live many times. Yes I should know the number! but I didn’t know there would be archival places like the www.cockburnproject.net
to collect the data when I started seeing him live in the early ’80s, or I would have kept track!!

On this page you will find my list of cd and dvd recordings from live shows and television appearances.